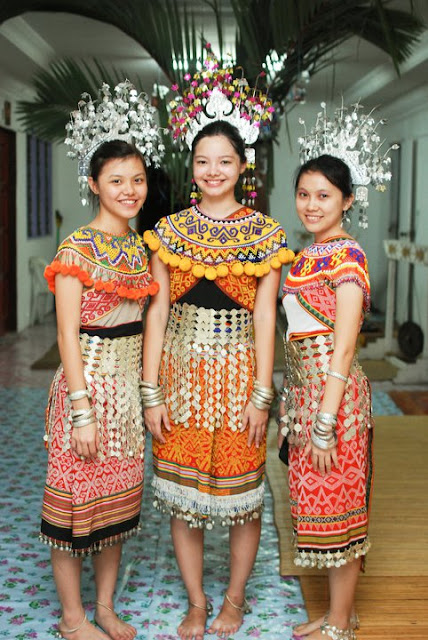 In the tropical land of Borneo island live a tribe of orang asli (aborigine) who called themselves Orang Iban, which is the biggest tribe among the Sea Dayaks. They have lived on the Land of Hornbill, Sarawak, for more than 1000 years and adopted to the nature life perfectly. They practise the life of taking from nature and return to nature. Their dresscode is a sign where this philosophy well demonstrated. 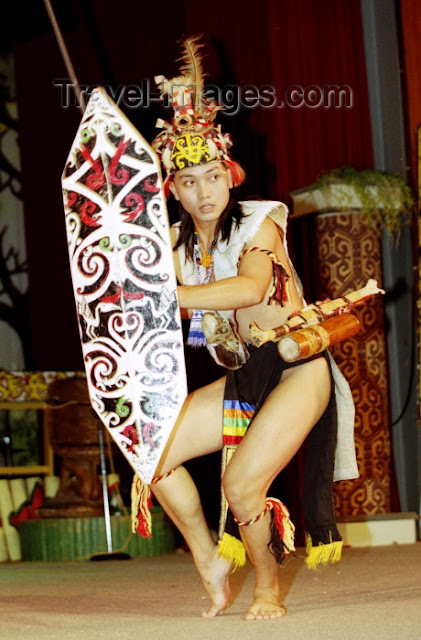 The male Iban is dressed in Baju Burung or vest and sirat woven loin-cloth (cawat)which is a warrior's outfit. They also wear accessories such as a belt, armlet and anklet made from silver and a headgear decorated with hornbill feathers. The Iban maiden wears the ceremonial dress consisting of the bidang cloth, marek empang which is a chest adornment, the sugu tinggi headdress and other silver ornaments such as the coil belt and bangles. 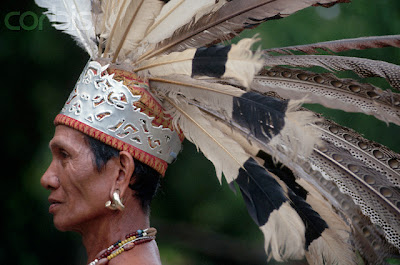 photo source
The Iban headgear is known as ketapu or setapuk tunjang. It's made of dried leaves and decorated with silver crown and hornbill feathers. 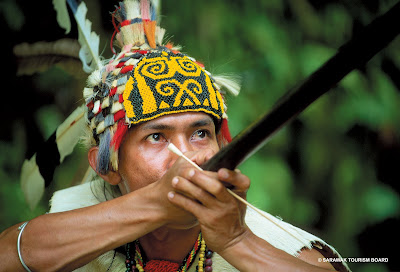 photo source
The other type of headgear is called ketapu silung. This kind of headgear is made of rattan canes and decorated with coloured seed-beads in the front part and a few bunches of goat's hair. This kind is tradittionally worn by Iban,Kayan and Kenyah of Ulu Batang Rejang, Sarawak. 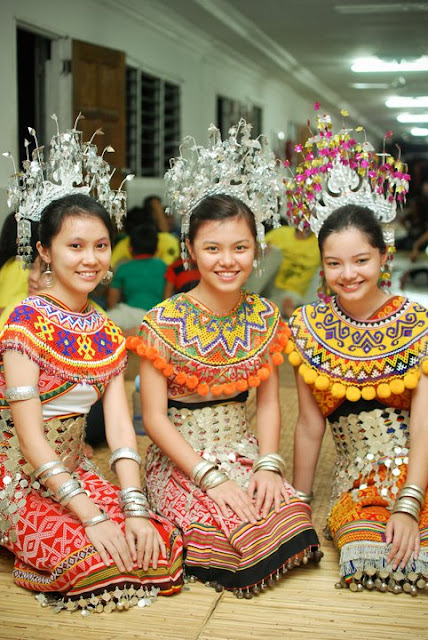 Sugu tinggi is a ceremonial headgear worn by Iban maiden. It is made by Chinese silversmith from Sarawak. The design is in a form of a comb with pieces of hairpins decoreted with beautiful repousse and embossed flowers. Iban women still wear this headgear, especally during ceremonies.

The beaded collar which the Iban women wear is called marek empang. It is a common form of chest adornment in a ceremonial dress code. It is made of beads which crossed over 128 lines and ended up with the marek empang bubble. The pattern of marek empang can be Iban tradition motif or bamboo shoot style.

The pua kumbu is Iban's ceremonial cloth or woven blanket made from cotton and dyed with natural dyes namely roots of morinda (engkudu) for the deep rich red colour and tarum leaves for indigo. It is produced using the resist technique called ikat (kabat). These complex motifs or designs are normally inspired by dreams, nature, as well as the Iban beliefs and values. The Iban women also produce the woven textile known as sungkit and kain karap/anyam/sulam, using the technique of pakan timbul or pilih. 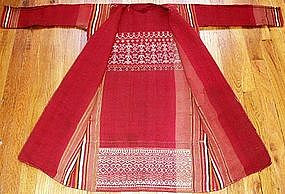 photo source
Baju sungkit is the Iban men's jacket which is made of cotton. The designs are made using the sungkit technique (top back) and for the bottom part (back). It is worn by Iban men for festivals and ceremonies.
Posted by Twin Angels at 12:49 pm

Twin Angels
Outgoing and like to visit places to learn their unique culture and discover new things around. Find me if you need a tour guide in Malaysia.